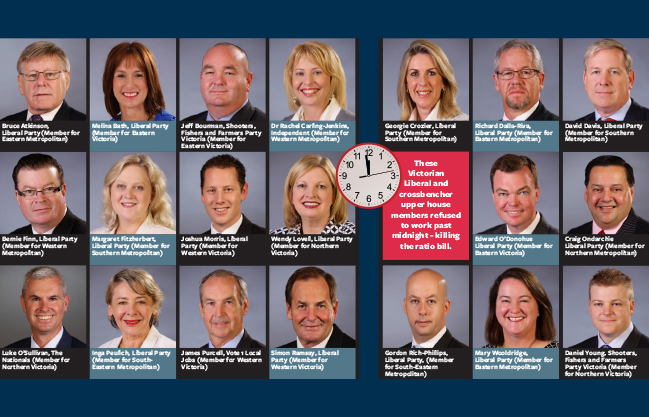 The Victorian lower house passed the Safe Patient Care Act Amendment Bill on 6 September 2018. It needed to pass in the upper house yesterday to become law.

While thousands of nurses and midwives were working last night, Victorian upper house Liberal and some crossbencher politicians refused to work after midnight to improve nurse/midwife patient ratios in our public hospitals across the state.

However, at midnight the Liberal Opposition and some crossbenchers voted to oppose the Andrews Government’s motion to extend sitting time to enable the debate to continue and make the new ratios law.

Yesterday was the upper house’s final sitting day and the last opportunity to amend the Safe Patient Care Act.

The bill proposed the phased removal of the ‘50 per cent rule’, the introduction of new ratios in oncology, acute stroke units, haematology wards and emergency department resuscitation bays, and improved ratios in palliative care, birthing suites and special care nurseries. The details are in the Newsflash dated 27 August 2018.

If the bill had passed, ANMF would have continued to ensure that all midwives who wanted to, could continue to work in special care nurseries despite the Australian College of Midwives’ recent misinformation campaign.

The timing was tight, but it was possible if Opposition upper house members had focused on improving public hospital staffing levels and patient care. The irony of the time wasted by multiple long speeches was not missed by those of us in the public gallery watching politicians who have previously lectured busy nurses and midwives about increasing their ‘productivity’, some of whom sought to substitute nurses and midwives with assistants in 2011-12. These important agreed bills, about the online gambling industry and cyclists’ legal right to compensation, were passed with no amendments. But there will be no employment or funding for 611 additional nurses and midwives in our hospitals starting from 1 March 2019.

Who killed the ratios bill?

For the record those upper house members who blocked and stopped the debate to improve nursing and midwifery ratios and improve patient care were:

We know ANMF members will feel betrayed, frustrated and angry that these upper house members did not acknowledge the urgency of these improvements to enable our public health system to respond to increasing patient need and demand. However, we have an opportunity on 24 November – election day, to right the wrong.

Today I had been hoping to start planning the implementation work for the removal of the 50 per cent rule next March. Instead we will sharpen our focus on the reality that the Safe Patient Care Act Amendment Bill will only be passed by a re-elected Andrews Government with potentially different members in the upper house.
I have written to Opposition Leader Matthew Guy seeking a written explanation about why Liberal party members refused to work after midnight to see the bill through to finalisation. I am also writing to the other upper house members who took the same action.

We will work to ensure that a new bill will be passed early in the life of a new Andrews Government.

Thank you again to the reps and members who despite waiting so long, put in so much work, advocating for the improvements, and assisted us by collecting data to ensure we were identifying and prioritising the clinical areas of highest need.

Job Reps please print this message for your workplace noticeboards.